In Holland Dutch Doctors have agreed to speak openly about serious medical errors they make as part of a national patient safety campaign.  The Dutch Institute for Healthcare improvement have produced a document to address the culture of secrecy surrounding mistakes.  This document was circulated to all 46,000 members of the Dutch Medical Association.

This approach mirrors the recommendations of the Department of Health and Children’s commission on patient’s safety entitled “Building a Culture of Patient Safety” which was published in July 2008.  This report argued that Doctors should make full disclosure of medical errors to patients to enhance patient safety.  It is also in keeping with their ethical commitment of honesty to patients.

The report stated that “the overriding principle accepted by the commission is that patients should be entitled to expect honest and open communications in relation to adverse events that may have caused them harm”.

In January 2009 Minister Mary Harney signed into law the Protected Disclosures Provisions of the Health Act 2005. This provided statutory protection for whistle blowing by healthcare workers who feel that the health and welfare of patients receiving treatment are at risk.

To date the State has not implemented the recommendations contained in the Department of Health’s Report.

Contrast this with the position in the United Kingdom where from April 2010 it will be mandatory for the NHS Trust to report all patient safety incidents  to the National Patients Safety Agencies.  All 400 NHS Trusts in England including Hospitals, Primary Care Trusts, Mental Health Services and Ambulance Services will be obliged to report adverse incidents. This information will then be shared with the NHS Regulator.

The deep reluctance on the part of the Irish Medical Profession to impose upon their members a positive legal duty on Doctors to own up quickly to medical errors is only causing greater distress to patients.  It is forcing them to go down an expensive and often risky legal route.

Medical negligence claims carry huge risk and different standards of legal principles have consistently been applied by the courts when dealing with these claims.  These principles tend to favour Defendants as the standard of negligence required to be proven is higher than in a normal liability claim.

This adds to the trauma of injured victims.  Early admission of fault and settlement of these claims would alleviate the suffering of injured patients.

Reported medical accidents have nearly doubled since 2008 and now stand at nearly 90,000.

In 2008 the total paid out for medical negligence actions (damages and costs) was £25.5 million.

Medical negligence damages represent less than 50 per cent of the total amount of the states liability for damages. 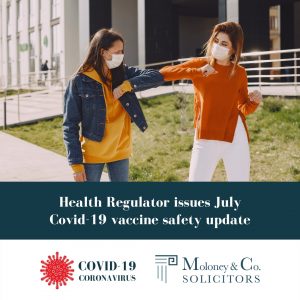 The Irish Health Product Regulatory Authority issued a further safety update relating to Covid-19 vaccines on the 15th of July 2021.  The latest update included an ongoing review of suspected side effects notified to the HPRA safety monitoring system. The HPRA again confirmed that all vaccines have some side effects, but the vast majority of […] 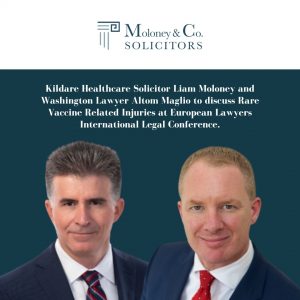 Kildare based Solicitor Liam Moloney (www.moloneysolicitors.ie) and Altom Maglio, the Managing Partner of the leading Vaccine Lawyers firm in the USA Maglio, Christopher and Toale (https://mctlaw.com) will address the Pan European Organisation for Personal Injuries Lawyers (www.peopil.com) Conference in Malaga in October 2021 about serious vaccine adverse side effects and how patient’s rights to seek […]